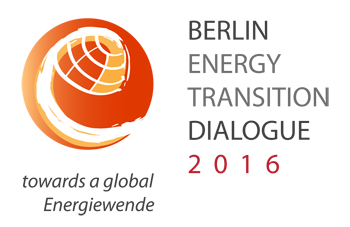 Enervee is excited to be part of the Berlin Energy Transition Dialog on 17–18 March. Ministers from over 40 countries and 1400 participants have gathered in Berlin at the invitation of the German Federal Ministry of Economic Affairs & Energy for international dialog on the global energy transition to increase energy efficiency and the use of renewables.

It was refreshing to experience a real sense of urgency from world leaders like Dr. Frank-Walter Steinmeier, Federal Minister of Foreign Affairs, who referred to the “Energiewende” as Germany’s “man-on-the-moon” initiative.

…and to learn about clean energy innovations that are breaking down barriers and challenging myths. 50Hertz, the transmission grid operator in NE Germany serving 18 million people, already integrates 49% intermittent renewable energy (wind, solar) — and can expand above 70% without the need for storage. In parallel, zero energy buildings have become a reality.

IEA Executive Director Fatih Birol mentioned Wednesday’s announcement that energy-related CO2 emissions may have peaked in 2014, even though the global economy grew by 3.4% in 2014 and 3% in 2015.

This is because 90% of all new electricity generation was from renewable sources and coal generation is increasingly being replaced (by renewables in China and by natural gas in the USA). Although this is good news, it’s not enough to achieve the deep carbon cuts that global leaders committed to in Paris in 2015.

Reflecting on all of the contributions from around the world and across sectors, one thing is clear: incremental approaches are not only inadequate to the task, they may hinder the very innovations needed to turn challenges into vibrant economies built on new business models. It was therefore fitting that sustainability pioneer Amory Lovins, Co-Founder, Chief Scientist and Chairman Emeritus, Rocky Mountain Institute, was awarded the Officer’s Cross of the Order of Merit of the Federal Republic of Germany at the evening reception.

Energy efficiency and efficient markets took center stage at BETD 2016, and there is a strong case to be made to put the consumer at the heart of next year’s BETD program.